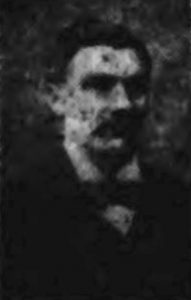 The Friends of Allerton Cemetery recently received a request for information regarding a Mr James Johnstone and his daughter Olga from a Titanic Historian. Not surprisingly the Friends were in turn keen to know more about the connection to the Titanic and Liverpool.

He was the son of Andrew Johnstone, a shoemaker, and Jane McLean. His father was a native of Dumfriesshire, whilst his mother hailed from Edinburgh.

By 1903 he was a 1st second class steward aboard the the Panama.

He was married in Sacred Heart Church Liverpool, on 20th November 1891 to Mary Frances Pinnington.

James was onboard Titanic for her delivery trip from Belfast to Southampton, when he signed on for the maiden voyage on 4th April 1912, he gave his age as 41, and local address as the sailor’s home in Southampton.

His previous ship had been the Olympic (one of Titanic’s sister ships), and as a first class steward he could expect monthly wages of £3,15s. Aboard Titanic he served as a first class saloon steward night watchman, and reported for duty every night at 11pm, taking over from bedroom stewards after they had turned in following their daily shifts.

Following the disaster (15th April 1912), James continued to serve at sea throughout the first world war, and came out unscathed, but his eldest son James was not so fortunate. The younger James was serving as a mess steward aboard the Lusitania, when that ship was torpedoed and foundered on 7th May 1915.  His body if recovered , was not identified.

James Johnstone was still working at sea as late as August 1926, then aboard Cedric. He remained living in Liverpool, latterly at 249 Prescot Road, and in his later years became afflicted with senility. He died in hospital on 16th December 1943, aged 84, and was buried in Allerton Cemetery Liverpool, his widow, Mary France, died in 1951.