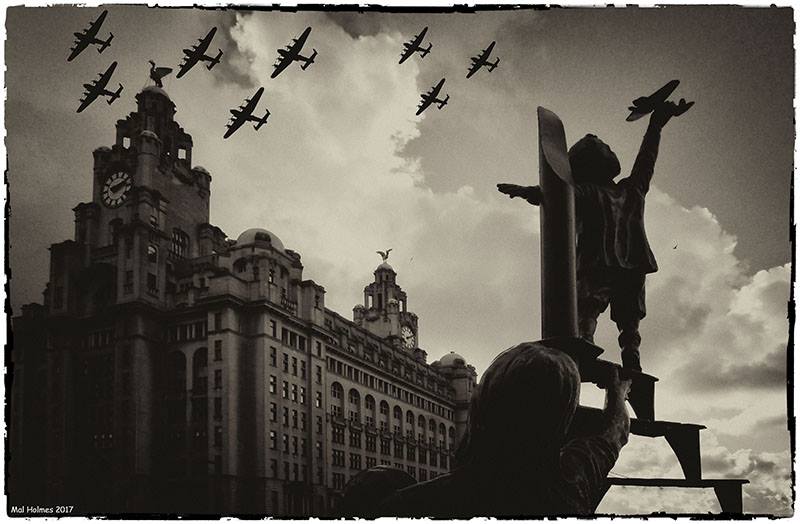 For this Allerton Cemetery Grave Story, we stroll to the back sections of the cemetery to look at a small selection of graves on Section CH37… these are just some of the 30+ graves dotted in various sections at the cemetery, all linked by one of the most horredous stories of civillian casualties during the Liverpool Blitz of WW2.

It is the 29th November 1940, a cold evening, the air-raid sirens have been droning for some time, as the residents around the Edge lane area of Liverpool. made their way from their homes, to the Durning Road Air-Raid Shelter. This shelter was a really secure shelter, located in the basement of a large Junior Instruction Centre situated on the corner of Durning Road and Clint Road.

Many people were making their way to the shelter that night, and over 300 men, women and children would wait out the German Bombers overhead. In the early hours of the morning… The bomb struck a direct hit on the Centre, with this hit… the lights went out in the basement, as the ceiling caved in. As it was a cold night, the Centre boilers had remained lit. The boilers were directly above the basement, and in the dark the boilers burst… cascading boiling water on those below in the dark… As if this wasn’t bad enough, the incoming gas main to the boilers, ruptured and ignited and many people were scalded and/or burned to death…

Over 300 entered the shelter that night but sadly less than half survived.

The McCloud family, which included Mum, Dad and the three young children, were amongst the dead that night (as per casualty list) also the Lucas children… The Allerton Burial Registers of the day, record both the McCloud’s and Lucas famillies being buried in Section CH37, however and sadly, Florence Lucas (inscribed on the ‘Lucas’ headstone) is not recorded in the same Register… Many of the dead that night were unrecognisable, and had no I.D. and as such were buried in a mass grave in Anfield Cemetery. Searchers at the time, looked for 2 days, to recover more bodies under the rubble, but after this time, the search was called off… the rubble was ‘limed’ to reduce the odour, and the basement was filled in… As far as my research can tell, the latter bodies are still in situ. a ‘true’ war grave.

Churchill, later remarked that the Durning Road Shelter bombing, was the worst civillian disaster of the war… However the reporting of the Disaster by the Country’s Press Agencies (even the Liverpool Echo) was very low key, by an edict from central government… but there lies, another equally disturbing story….

A more detailed description of that nights disaster can be found at the website below, including a list of casualties, including the 30+ buried at Allerton Cemetery…